Marathon day started early (as always) with the usual preparation (you know, the same prep that I described in other race reports). This time I was going to have the company of Matt Geleta who is running 2000km in 20 weeks to raise funds for education of Ebola orphans in West Africa. I drove to pick up Matt and then we headed to the race start at Black Mountain Peninsula. Remember that the plan for marathon 10 was to run an actual race, the Weston Creek Half Marathon (WCHM), and then continue to complete the full marathon.

We arrived and it was still dark, I got my race number and we discussed our plan. The goal was to take the WCHM easy and keep a steady 5 min/km pace that we would then try to hold for the whole marathon. Under race conditions you usually go out too fast in the beginning but the gentle uphill in the first 600m helped us to stay on track.

Left: our pace for the first 21km. Right: Race map. WCHM is the out and back course in blue. For the full course and stats check  my Garmin or Strava activities.

As we talked about our runs, our fundraising activities, and also about career (Matt recently finished his Honours Physics degree), we inadvertently increased our pace. It was still comfortable to chat, so we kept it close to 4:50 min/km until the turning point. The halfway mark was roughly at the highest point of the undulating course and we had three kilometers of really gentle downhill that allowed our pace to get down to the 4:30’s range. We started to catch the runners ahead of us and we overtook quite a few. We were both feeling well and it was still possible to chat, so we decided to keep it like that. I have to admit, overtaking people makes you feel good and with 4km to go we increased the pace even further. With 500m or so to the finish line we heard: “You with the hat, I’m gonna catch you!”  After so many triathlon races I have this built-in mechanism of speeding up whenever I hear that faster and louder breathing pattern typical of someone pushing hard to overtake you. So when Matt (the one with the hat being chased) looked at me and said: “Sprint finish?” it was too late, my legs were already in sprint mode. Conclusion? Crossed the finish line at a totally unplanned pace of 3:20 min/km.

After the race I briefly chatted with Trent Dawson (a friend from the Bilbys Triathlon Club that finished with an impressive time of 1:21:20), and also met a few other runners including Will, the guy to blame for the sprint finish 😉 . I picked my camel back from the car and off we went to the second half. 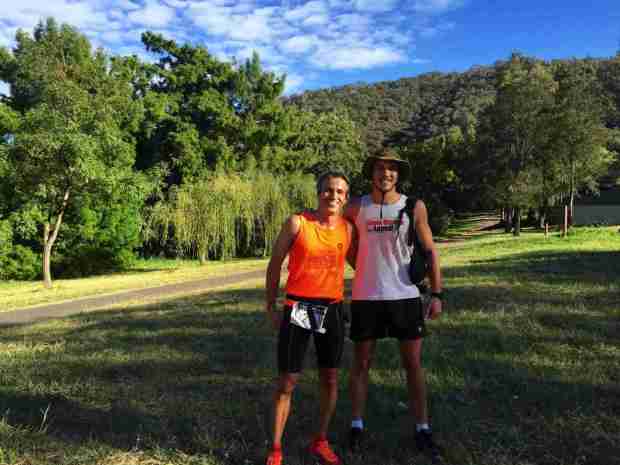 With Matt after the WCHM.

We followed back the course of the WCHM race and cheered other runners along the way. We passed the race turning point and continued south to meet Emily at The Runners Shop in Phillip. As I mentioned in a previous post, Emily organised with On to have a pair of Cloud shoes donated to go on a raffle for my fundraising. I thought it would be a good idea to pass by and take a photo of the shoes. Here they are:

Emily bringing the shoes for the “official” photo. This is the model that you may win if you donate to Can Too through my fundraising page (it will come in your size 😉 )

It does look nice, doesn’t it?

Remember, every $10 donate to Can Too from 16 March to 16 April through my fundraising page will give you an entry to the draw.

Visiting Emily at The Runners Shop.

Ah! I also took the picture above with Emily without realising that my GoPro was on for the whole time. This 9 seconds video captured her reaction when the photo was taken. What was she expecting after 34 km?

Just after leaving the shop, we called our friends Ruvi and Ethan that were supposed to meet us for the last 10km. They told us they were on the other side of Red Hill, ready for the last 5km (???). Given that we were still at least 40 minutes away from their location, they decided to start running and meet us at the finish line. So off we went to face Red Hill. It was nice to change from bike paths to trails and the hill wasn’t as bad as we thought it would be.

The hill was clearly easier for Matt…

After Red Hill, the Parliament House, then the shores of Lake Burley Griffin. At that point we had already done the marathon distance and Tekle, on his bike, found us. He escorted us to the, again invisible, finish line. 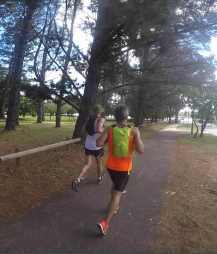 Tekle on his bike.

After 4:04.45 (3:47.30 of moving time) and 45.18 km we arrived at our final destination carefully chosen to satiate two starving marathoners: Brodburger. A big thank you to Matt, Liz, Tekle, Ruvi, Ethan, Richard, Luiz, Paty, Nina, Elton, Mari, Gabi, Aline, Lachlan, and of course Marcele and Clara for joining me at the celebration of marathon number 10!

10 marathons and she is still with me… Happy couple!