I’ve just registered for my next marathon. It will be this Sunday in Batemans Bay, just a couple of hours from Canberra. It will be the first flat course and I expect to suffer much less than in the previous marathon. It will also be the October marathon and to raise awareness for breast cancer I’ll be running in pink. How about you help me choose the outfit? I’ll be posting the options during the week. Let’s start with the head: Afro wig, boring cap, or dyed hair?

…running without knee pain for the first time in two months!!! That’s right! Today I went for this lunchtime run:

and there was no sign of my knee injury. Given that I’ve been dealing with it since just after my second marathon, this is really great news. I had to make big changes to my training, swapping running by swimming and cycling, and avoiding long runs. I’m currently leaving two to three days between consecutive running sessions and it seems to be finally working. I thought that I would have to endure the pain for 8 more marathons, but maybe won’t!

If you’ve read my previous race reports you may have had the impression that I’ve been cruising through them all. Apart from my knee injury just after the second marathon, it has all been brilliant: stunning locations, amazing views, the company of family and friends, and, to my surprise, a really fast recovery even after some pretty hilly courses. Well, this time was a bit different…

The night before: do you know the course?

This time I didn’t have to prepare a course myself as the marathon distance would be covered by running the last two legs of the Sri Chinmoy Canberra Trail Ultra. A couple of days before the race, I downloaded the track file from the event website to later upload to my watch. Trusting the technology, all I knew at that stage was that I would be climbing three big hills along the way, but I didn’t bother to study the details of the course. The night before the race, I sat down in front of the computer, merged the two gpx files into one, and went through the ordeal of uploading gpx files to Garmin Connect. A few hours and different platforms later (I also tried Mapmyrun and Strava) and I finally had a route uploaded to my Garmin account. Now it was only a matter of uploading to my watch. My experience with the first 3 marathons was that this step was easy, so I left it to the next morning.

With Jasen running the first leg and Shane the second, I would only start between 11 and 11:30 am. So there was plenty of time to get everything ready. Uploading the file should have been an easy task, only that this time it wasn’t! In the end, I gave up the idea of having a map on me and decided to rely on the markers used by the organisers. “The arrows on the ground and the ribbons on the trees should be enough”, I thought.

My wife drove me to the second transition at the Arboretum where I waited for Shane. It didn’t take long and before 11:30 I was on my way. The first couple of km were downhill from the Arboretum and the right knee gave early signs of pain. It was annoying but I knew from training that it would get better after warming up, and it did. At the third kilometer I heard someone yelling my name, I looked back and saw Simon, a colleague from the Bilbys triathlon club, pointing me to the sharp left turn that I had just missed. I am so thankful to him. Without that warning I would have run along that bike path for a while without noticing that I wasn’t on the right track…

It wasn’t long until I reached the first climb, a southwest approach to Black Mountain. Even though I run around Black Mountain quite often at lunch time, this was a different, and quite steep, route to the summit. At some point I decided to walk and I felt very bad about it. I usually go steady on the climbs and walking that hill had an effect on my state of mind. Even though other runners were also walking and I tried to convince myself that running was just a waste of energy on hills that steep, the thoughts of “something is wrong” and “I’m not in a good day” followed me through the entire race.

Final map and elevation profile. For the full activity go to https://connect.garmin.com/modern/activity/911187276

The downhill was also very steep, which was not good for my knee. I naturally jump with my left leg and land on the right, so it is far from ideal to have the injury on the right knee. I tried reversing the roles of the legs sometimes but was too uncoordinated to succeed, so I just sucked it up and kept going. Apart from a quick chat with Paul Cuthbert, the guy that ended up winning the solo 102 km race, the rest of this leg was pretty much uneventful. Although I felt slow and in a bad day, I finished the 24 km of this leg in 2:14:20, 11th in the overall classification.

24 kilometers later and I arrived at the third transition station.

I heard a “Go Andre” coming from a group sitting on the grass at the third transition (I think it was Simon who finished 5th in just over 2:05) and that gave me an extra boost for the beginning of the last leg. That didn’t last long. At around km 27 a blister had developed just below the ball of my right foot and I started to feel a burning under my right arm. Chafing and blisters can be minor distractions when you’re feeling good but can have their effects magnified if your mind is not in the right place. That followed me for the next 3 kilometers when I decided to do something. I needed a distraction! I took my camera out of the homemade support on my camel back and started filming myself running. That worked and soon I forgot the blister, although the chafing reminded me of its existence until the end of the race.

Selfies for distraction. The orange Can Too shirt as a reminder of why I’m doing all this!

I moved my backpack to the front to grab something to eat and started to feel better. I kept following the large path and was pleased to see a gentle downhill just before the 32nd kilometer. I was again moving well and thought I was finally rebounding from all those mental lows. But suddenly I realised that I hadn’t seen the blue arrows markers on the ground for a while and the orange ribbons were also nowhere to be seen. Am I in the wrong path? Should I go back? All these thoughts came to my mind but I decided to keep going, given that the alternative was to climb back what had been a lovely gentle descent so far. Despite the lack of course markers, I kept telling myself that without any important crossing, there was no need to have them. So I kept running until I reached a fence close to the road. No markers there! Oh no! I had definitely missed a turn somewhere! I went back, cursing myself and wondering where that turn would be. As I approached the only possible turn, I looked to the ground and saw three huge blue crosses indicating that I shouldn’t have gone that way. How did I miss that? My explanation is that I was distracted while getting the food out of my backpack and I didn’t see it. I also blame a tired brain that was easily lured by that downhill. Anyway, at that point, the actual course would turn right towards a rocky climb without any clear path: my second walking moment. This time it was easier: my pride had been left way back at km 7 on the Black Mountain climb. I was just surviving and now, with extra 2 km on me.

What is the difference between the two maps? Only that the right one shows my position 13 minutes after the one on the left. Two km and 13 minutes wasted on a missed turn! 😦 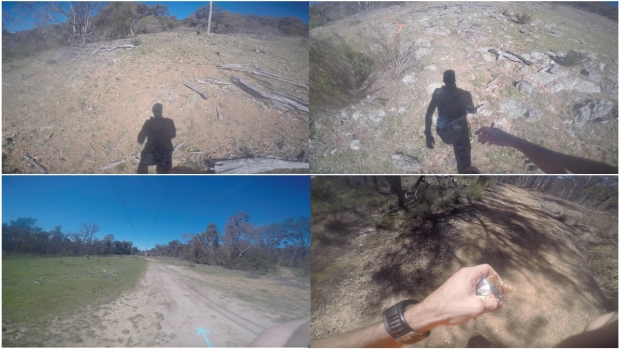 From top-left to bottom-right: a) the rocky climb just after the turn that I missed. b) an orange ribbon indicating that that improbable climb is the right one. c) How could I have missed those big blue arrows twice in the same race? d) I blame the energy bar!

I reached the road towards Mount Majura summit and walked again. When I finally reached it, I took my time, chatted with the volunteers (if any of the two volunteers ever read this: THANK YOU!), drank water and sports drinks, refilled my camel back, ate watermelon, banana and lollies, and left towards the steep downhill. At this point I had already accepted that finishing was already a great result and just kept going. I approached a big puddle just after km 40 and decided to jump over it. What did I have in mind? My very tired left calf immediately contracted and cramped by that sudden and unexpected movement. What a day! 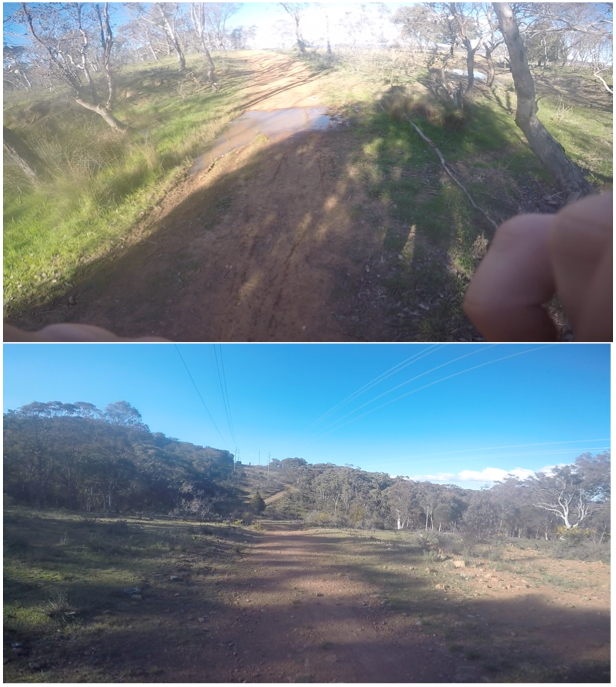 Top: There were many options but I decided to jump over it with very tired legs. The result? Cramps. Bottom: The last climb towards Mount Ainslie.

I reached the final climb towards Mount Ainslie. Another walk. No shame, no regrets, nothing. Just a vague image on my head of a volunteer telling me that that was a tough climb and that there was another kilometer to climb to reach the summit. The slope was more gentle, though. So, no more walks until the end of the race!

From top-left to bottom-right: a) not far from the finish line and I passed by Paul Cuthbert, the winner of the solo category, heading back. b) The arrow (from a different race) pointing in the wrong direction didn’t help my tired brain. c) The best view of the entire race. d) Does it need caption?

I went down the track that I had run up two months before in my second marathon. I was exhausted but already enjoying that good feeling that comes when you’re close to the end of a tough event like that. I reached the War Memorial and followed the road towards the lake. Someone yelled my name from a car. I couldn’t see who was that person, but I’m in debt by the last and much needed encouragement before the finish line.

And I did it! 49.2 km in grueling 5h 22min. That was marathon 4 done and dusted! Only 20 days to the next one! Keep donating to cancer research.