As mentioned in my race preview post, I chose the Great Ocean Road (GOR) ultra marathon as my last one. With almost 800km of road separating my home to the start line, I decided to take a few days off work to drive with the family and enjoy a long weekend at the beautiful town of Lorne. We rented a house big enough to fit the four of us (dog included) and seven of our best friends in Australia (two dachshunds included 😉 ). What a crew for marathon 12! We were all there by Friday night and had a light dinner with wine and cheese by the fireplace. Well, the others had wine…

View from the balcony. Tough life…

Kids by the fireplace.

We had already been to the GOR a couple of times but it was the first time for Tiberio, Cami, Anita, Jana, and Gui, and we took the Saturday to drive to the 12 Apostles. It was also my chance to follow the full marathon course by car. The astonishing view of the sea on the left got me pumped for the race but the number of ups and downs on that road… not so much. As I drove along the road, I tried to picture how the race would unfold the next day: the drinking stations, the points where I would eat, the more critical climbs and the gentle descends where I could pick up the pace. The remaining mysteries were the two big climbs that only the ultra runners would do. I knew them on paper but couldn’t spot them while driving. Maybe it was better that way…

It wasn’t all about the race, though. We really had fun.

Jana, Cele, Cami and me 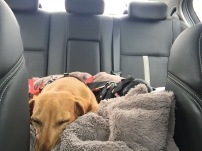 We all had fun! Really? 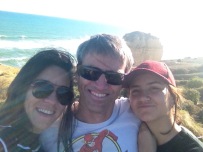 THE trio :-). I’m wearing my “The flash” t-shirt in the hope of some inspiration.

When we got back from the drive, Gui cooked a great carbonara for us. Again, by the fireplace and with good wine. Well, the others had wine…

I woke up early in the morning and couldn’t believe it was time for the last marathon. It seemed like yesterday that I started all this. As I’ve done so many times, I put my bright orange Can Too gear and logged into my Can Too fundraising page to check the donations. I went through all the messages of support from my friends and got extra emotional. They were doing their part with the donations, now it was my turn to finish up with the final (ultra)marathon.

It wasn’t planned,  but the house we rented was conveniently located just a couple of minutes from the start line. As I walked down the hill and approached the beach, I could see other runners arriving and started to feel that pre-race excitement. More than 1000 competitors for the marathon and another 65 ultra runners were about to race along one of the most scenic roads in the world.

And here we go! My goal in the first few hundred meters was to control my pace, trying not to follow the speedy guys ahead of me. Despite my intentions, I still went faster than planned with paces of 4:32, 4:38 and 4:33 min/km in the first three kilometers. After that I tried to follow my race plan. 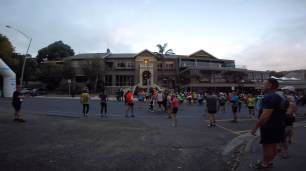 Start line early in the day. 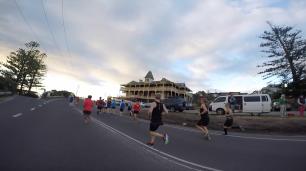 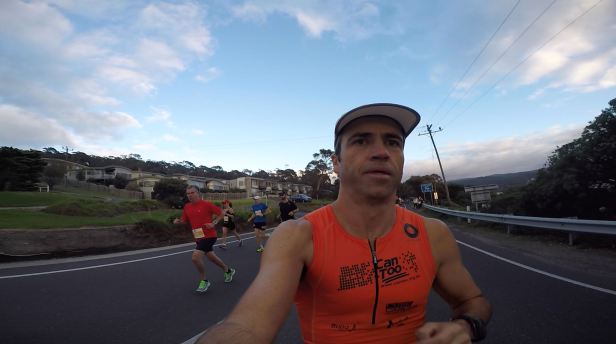 Selfie in the first kilometer.

I was still scarred by my two previous attempts at running distances close to 50km in hilly courses (see marathons 4 and 11) and I set my race strategy based on that experience. Afraid of the two big hills at kilometers 33 and 47, I decided to run at a solid but not too hard marathon pace (around 5:00 min/km) for the first 33 km and then see how my body would react to the hills. In other words, I had no serious plan for the second half of the race but to survive.

With so many ups and downs it was hard to control the pace. I was going slow in the ascents and playing my strength by going fast in the downhills. For quite a few kilometers a pattern emerged: I would overtake a couple of runners in the descents while they would take their positions back in the climbs. It went like this for a long time and I completed the first 10 km in just over 46 min., 4 minutes ahead of my planned time. If you like numbers, here is a screenshot of the data from my watch for the first 10km.

Data from my Garmin for the first 10km (for the full stats click here). The pace was faster than planned but the heart rate was around 155 bpm, which is the normal level for my long distance efforts.

If you are not interest in the numbers, maybe you’ll enjoy the pictures I’ve taken along the way (click on the images larger versions).

Who has time for selfies in an ultra marathon?

You can see on the right the effects of the devastating bush fire that recently aaffected the region.

I was feeling pretty well and given the strong pace in the first 10km, I decided that I could afford to update my goal pace for the half-marathon distance to 4:50min/km. The ups and downs of the road continued and I kept going comfortably without raising my heart rate. Unfortunately at kilometer 15 my HR monitor went crazy and locked at a much higher rate. From then on I relied only on my perceived effort as the HR monitor took a couple of hours to get back to its normal readings. 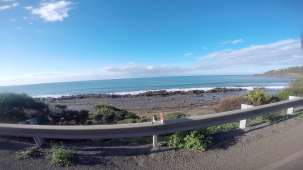 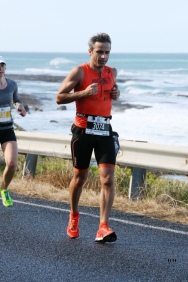 The ocean views were amazing, the sun shining on the sea, the waves breaking on the rocks, the rainbow coming out of those dark grey clouds at the horizon… Wait! Rainbow? Dark grey clouds? Oops! It seems that the weather was holding some surprises for the runners.

Look! A rainbow. I should take a pict… What? A rainbow? I wondered what was waiting for us behind that hill.

I crossed the half-marathon distance in 1h 38min, a 4:38 min/km pace. It was a fast half-marathon (for my standards), even more so if you consider the undulation of the course. I was surprised, happy, but also worried that failing to sticky to the plan could hurt me later on…

Data for 11 to 21 km and the HR monitor signal going crazy for a good part of the race.

Is it time for more photos?

When I realised that I was going faster than my PB marathon pace, I decided that was time to slow down a bit. I kept around 5min/km for the next 4 kilometers but then started to slow down even further as I began to stop at aid stations and felt hard to get back on track. As I was moving toward the dark clouds, the conditions were getting worse with a strong head wind that was picking up speed quite quickly. I was getting close to the 30km mark, the point where I usually feel the marathon pain and my morale goes down. It wasn’t that bad this time and apart from the urge to use the toilet and my focus on finding a bush where I could relieve my bladder, my mind was in a pretty good shape. After all, it was the last marathon and I was determined to enjoy every moment as much as I could. Finally at km 32 a portable loo! The pit stop lasted less than a minute and I was ready for the first big hill.

At the 33rd km a sharp right turn split for the first time the field of marathoners and ultra-marathoners. I had finally reached the first of the two dreaded hills of the course. My goal for this one, a 5km-long and 5% incline, was to just run without stopping or walking. But things turned out for the better and fear was replaced by strength and confidence. As I turned right, the wind stopped and the rain started to fall. The climb turned out to be well protected from the wind and that was a relief. I also began to reproduce in my mind the feelings and thoughts from a recent training session on the treadmill where I ran 5km with 5% incline at 5:30min/km to try to reproduce this part of the race. If I did on the treadmill I could do in the race! Well, not exactly at 5:30min/km as I had already 33km accumulated in my legs, but still…

View of the right turn for the ultramarathoners to the 5km long 5% climb.

At least the view up the is great!

It took me less than 34 minutes to get to the top. On my way down, I completed the marathon distance and took a photo of my watch: 3h38 min. Not a bad effort! The downhill wasn’t as fast as I thought it would be as my legs weren’t very responsive at that point. It took me 26 minutes to get down that hill.

My watch as I crossed the marathon mark. 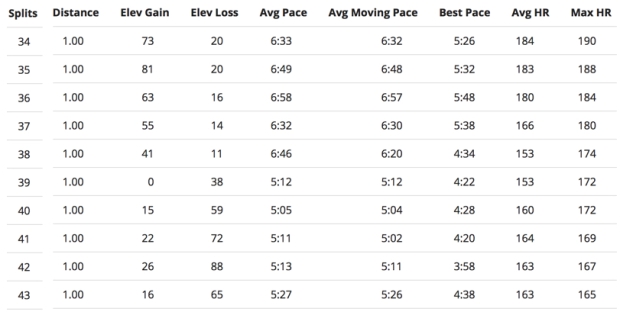 Splits for the ten kilometers of the first long hill.

As I reached the base I was feeling awesome but had to face the strong winds back again and slowed down considerably again. At kilometer 47 the steepest hill of the race started: 2.5km at 9.7%. I had also mimic that on the treadmill and used the same strategy as in the previous hill: project in my mind the positive outcomes from that training session. I just said to myself: I won’t walk, I’ll run! It was slow and painful but I did, and it felt really good. So good that I dashed downhill feeling much better than in the previous hill.

Back to the road and into the last part of the race, an eight km mostly flat stretch toward Apollo Bay. I tried to keep up with the momentum from the downhill but my left calf started to cramp. I limped, stopped at the side, stretched a bit and continued. I felt that I had more in me and that I could go a bit faster but every time that I pushed a bit more, my calf would contract as if it would cramp. I changed my stride and managed to keep running. Another small contraction, now on my right calf. Walk, jog, and back to running. 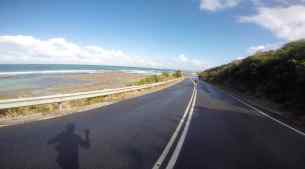 The flat stretch to the finish line.

I had reached the point where the road was partially open and cars were coming against the runners flow on the other lane. Drivers would honk their horns, passengers would shout out loud to cheer us up. Whenever my black ultramarathon bib got noticed, the cheering would intensify. Yes, I was close, very close. Just before reaching the fenced area, I picked my camera from my back pocket and started to film. I wanted to have that moment registered. Funny enough I got the moment when a runner overtook me less than 50 m from the finish line. Not only was he in the ultra race, but he was also in my age group and beat me by two seconds. I didn’t really care, I had so much more to celebrate. It wasn’t just an ultra marathon, it was the end of a year-long journey of running and fundraising. 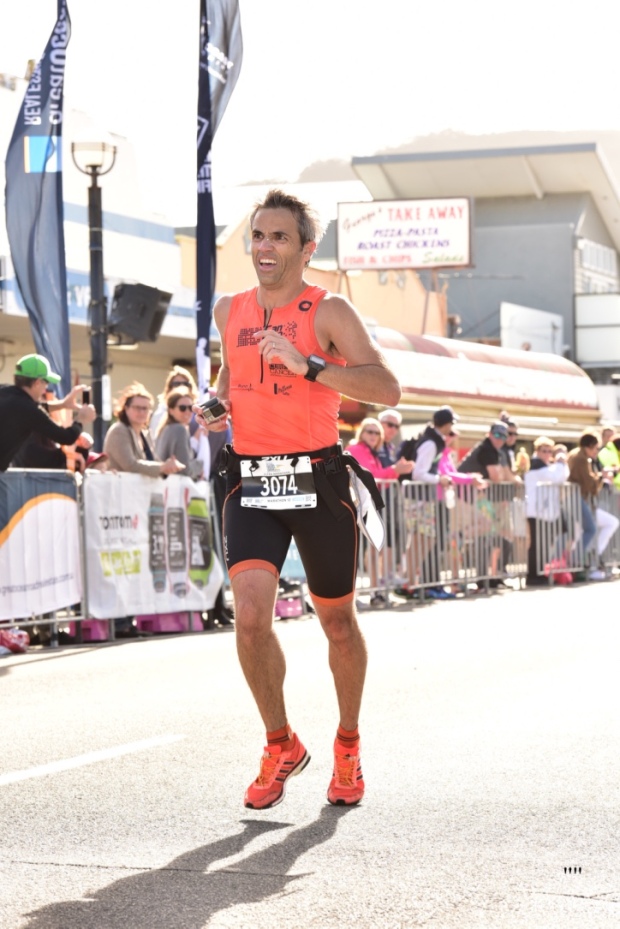 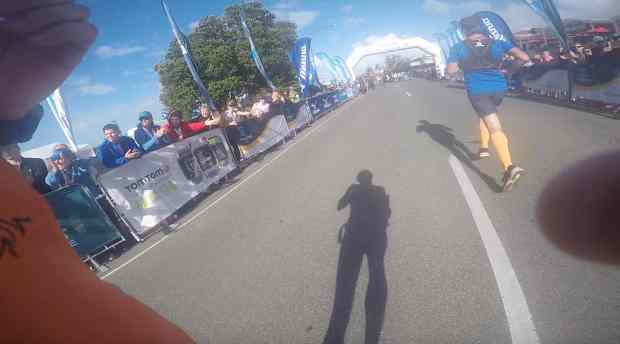 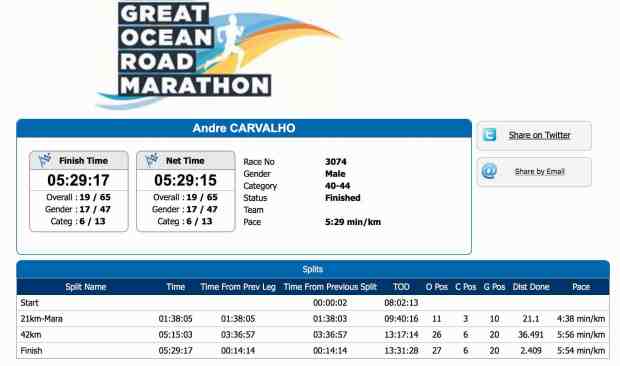 I crossed the finish line, received my medal and started to look for the family and friends. Couldn’t find them. It was a bit of an anticlimax as I really wanted to share that moment with them. Phone calls, messages… they were stuck in the traffic. As I was waiting for them, I found the Can Too tent with the Melbourne crew. I introduced myself, and received a warm welcome from everyone there, especially from Deb Christie, Can Too’s program manager in Melbourne. We took photos, talked about the race and also about my 12 marathons while waiting for my crew. They found me and it was a big, noisy celebration as it always is with Brazilians involved. I even got flowers!

They were late but they were there, and that’s what matters! 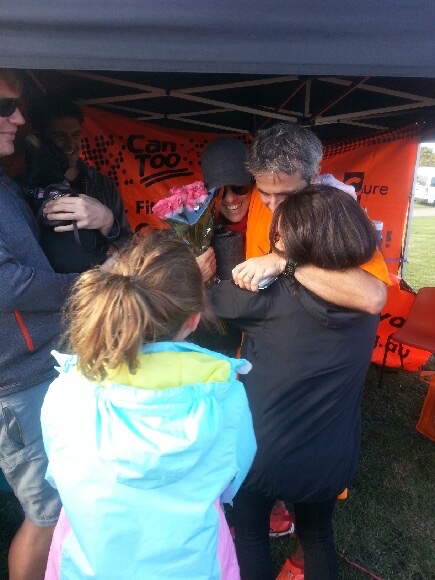