If there is one thing that I’ve learned after just two marathons is that there will be last minute changes to the course no matter how much in advance you plan it. It was like that in the first one and it happened again. My original plan was to run from Gungahlin to the Lake Burley Griffin climbing Black Mountain and Mount Ainslie. However, to make it easier for the runners who wanted to join me at different points of the marathon, I changed the map to the one shown on the left of the figure below. 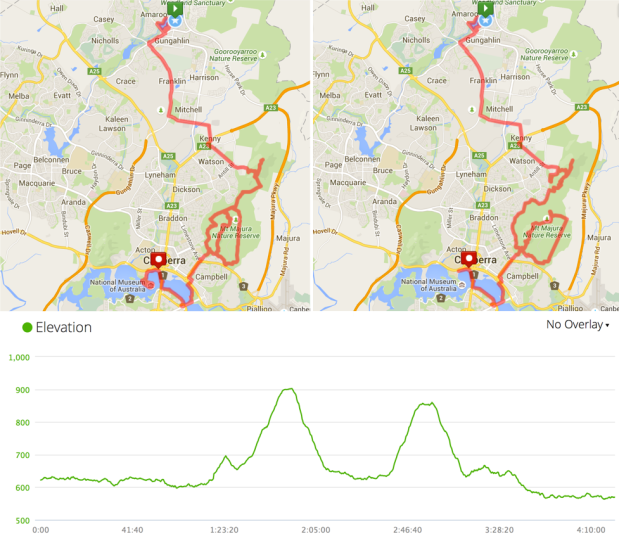 Left: Map made to replace the original plan. Right: What actually happened on race day. Bottom: Elevation profile of the marathon. You can check the stats of the run here.

With course updated and uploaded to my watch (after struggling for the third time, I promised to myself that I’ll write a detailed post on the tricks to make this uploading process work, wait and see…), it was just a matter of a good night of sleep before the second 42.2 km. “Frost then sunny”, said the forecast for Sunday in Canberra. Apart from the expected negative temperature in the early morning, a sunny day with a predicted maximum 12oC was looking perfect for the marathon.

It came race day and even though I had arranged for a 9:00 start, I was up at 6:30 for the pre-race ritual: anti-chaffing cream, first aid tape, filling camel back, energy gels and bars, camera, watch… On top of that there was feeding the cats, the dog, and waking up my daughter. The night before, Clara seemed excited to come along to take photos but changed her mind. I couldn’t compete with the combination of adolescence tiredness, the sub-zero temperature outside, and the cosy and warm bed. So from the original group of four (myself, wife, daughter and dog), only two of us ended up going to the meeting point at Yerrabi Pond.

The temperature was still below zero when Marcele and I met Luiz, a friend of ours, at the neighbouring lake for the first 4 km of the marathon. Just before we started, I turned the RoadID app on my phone to let people track my run. As you’ll see, this step turned out to be very useful for those joining me later. Marcele, Luiz and I began our 4 km loop around the lake under freezing conditions and lots of ice still on the bike path. They deserve especial thanks for braving the Canberra cold to run with me.

Winter sunny days in Canberra always deceive: it doesn’t look that cold but it is! Luiz, myself and Marcele braving the sub-zero temperatures. Bottom: I still don’t know whether my wife was happy or if the cold had frozen that smile on her face 😉

After completing the loop, they wished me good luck and I headed to the least interesting part of the marathon: a solo run along the bike path from Gungahlin to Mitchell and then going along the roads to reach the base of Mount Majura. Not even the kangaroos came to say good morning, so I won’t even bother putting up photos of this part.

I reached the base of Mount Majura at kilometer 14. There I met Kylie, a friend from the Bilbys triathlon club that had promised to run about 20 km with me. She had brought with her Guy Jones, another amazing triathlete to run with us. I was definitely in good company. Another Bilby, Petra Lean, was also there to take a few pictures and wish me good luck. What a lovely friend! I should have stopped to hug you, Petra! 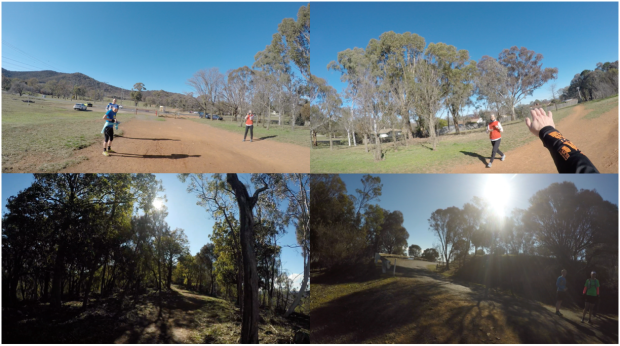 From top left to bottom right: (i) Kylie, Guy and Petra waiting for me with Mount Majura at the back. (ii) Thanks for the support Petra! (iii) Up Mount Majura. (iv) I didn’t quite recognise these two but they shouted “Go Bilbys!” and talked to Kylie and Guy. I think I should return to the club’s rides…

On our way to the top of Mount Majura, I missed a left turn and instead of going up, we made an unplanned loop just to come back to the same point. The first of a few mistakes along the course (compare the planned and actual courses in the first figure). Later that day, I learned from my friend Renee that she was following me on the map when she noticed our mistake: “No Andre! Wrong way, wrong way!”, she even thought of texting me, but I guess that in the end she just decided to enjoy my path getting off the original plan.

Does it need a caption?

I was feeling quite strong at this stage and ran almost comfortably to the top of Mount Majura. We got cheered by a couple of runners that recognised Kylie and Guy and shouted “Go Bilbys!”. I still don’t know if I never met them or if I simply didn’t recognise them. If the later is true, I’ll blame my focus on the run for that. Mount Majura conquered! Quick stop for photos, energy bar, and changing my GoPro battery.

At the highest point in Canberra!

We went down, again following a slightly different course from the original plan, and reached the more flat part along the base of Mount Ainslie. We decided to take this path to be closer to the place where Guy had parked his car. At this stage Guy and Kylie looked pretty comfortable and it was my turn to match their pace. Guy left us a bit before the Mount Ainslie climb. Another goodbye, another thankful handshake, and from then on was just me following Kylie.

From top left to bottom right: (i) Kylie and Guy looking good on the road at the base of Mount Ainslie. (ii) Kylie leading the way up. (iii) Here they are again! (iv) Happy to finish the last climb. It is all downhill from here!

With the change in course, we started the climb to Mount Ainslie at the 27 km mark from the south part, behind the War Memorial. The original plan was to climb from the west around kilometer 21. At least we didn’t do the whole loop around the base before climbing. It would have been a lot harder going up with more than 30 km on my legs. Kylie led the way up to Mount Ainslie and there we met the two runners again. We were not the only ones doing long runs up the hills! Quick stop for photos and down we went again.

Having changed the course after a few missed turns, we ended up doing a couple of extra kilometers. At km 33, we met Elton, a Brazilian friend that followed my path from the app and decided to meet us a couple of kilometers before the meeting point at the War Memorial. We were again three.

Left: Elton joining us at km 33. Right: Time for Kylie to go. It was a good run!

Behind the War Memorial another goodbye, now to Kylie. It was a pleasure running with you Kylie! I enjoyed the challenge of keeping up with her pace in our last 5 km together. It was at this point that my camera ran out of battery. No photos after that until the finish line! Grrrrrr!

It was now just me and Elton, but not for long. At the front of the War Memorial Alex was waiting to join us. When we reached the Lake Burley Griffin we met Kate, a Can Too runner that trained with me for the Sydney Half Marathon in May. Again, point for the ecrumbs app! Shortly after that and we were joined by Massao and Lucas, two other Brazilian friends. “This is looking like Forrest Gump”, said Kate. Well, there were two more to join: Heather, close to the National Gallery, and Renee at the Commonwealth bridge, With the two Can Tooers joining us, the group was complete!

We ran down the bridge back to the north part of the Lake where a few others were waiting at the finish line: Louise, Luiz, Paty, Nina and Marcele. We passed by them, ran a little more to make the right distance, and came back to celebrate the end of my second marathon.

Back row: Renee, Alex, Elton, Lucas, Heather. Front row: Kate, me and Massao. Thank you all for running with me!

During my stretching I learned that I had reached my fundraising goal for the second marathon while running. What a feeling! Again, a big thank you for all who ran with me on the day and for those who donated for cancer research!

To finish, the link to a one minute video with the group running at the 41 km mark.