As I’ve mentioned in this post, my usual strategy for minimising the effects that long training sessions have on the family life is to start early, really early. The girls like to sleep until late on the weekends so there is a big chance that when I’m done with my training, they are still sleeping or have just woken up.

I usually wake up by myself, no need for an alarm clock (unless a pre 6am start has been planned…). Having nothing planned for after the training, I decided to start whenever I woke up. 7:37 it was! Quite late, but given the freezing morning temperatures in Canberra, I thought it was actually a good outcome. A few minutes later and my wife woke up as well:

I’ll be honest with you, I’m not really a big fan of pancakes but the word “pancake” is one of the few things that can take our 13 year old daughter out of bed before 9am on a Saturday. It was a choice between running in this weather 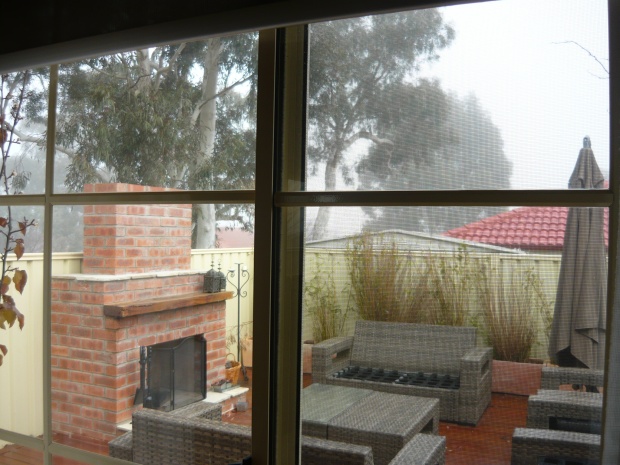 And the winner was…
…the girls and the pancakes, of course!!!!

It turned out to be a wise choice. With a maximum temperature of 11oC today, the conditions at lunch time were perfect. Dry, cool, and sunny!

Quick stop at around the 6 km mark for a photo.

It was such a beautiful day that I decided to take our dog, Mel, with me. She is a big dog and gets really excited when she sees my running gear. No, I mean REALLY excited (I’ll make a video next time and you’ll understand). Mel’s longest distance running so far is 13km, but that was a few months ago and I haven’t been exercising her much recently. I took her anyway, knowing that I should probably do a shorter loop at the beginning of my long 28 km run and drop her home after a few km. I left not knowing the exact course we would do, just feeling like hitting some hills. That was my strategy: at any bifurcation take the road with the steepest climb, unless it would take me back home.

When we reached the first lake, after just 3.5 km, Mel gave the first signs that she wanted to go home. Made me stop for a little wee and when she was done, she turned back. Oh, no way! I pulled her and she continued at a slower pace. It was like that for another km but she forgot that she was tired when she saw the birds by the lake. Mel wanted to chase them all. It was my turn to hold the pace. She ran for 8.5 km and ended up like this…

Mel after the run. It is not as bad as it looks. When I got home she was ready to play fetch!

…a very tired dog. After the short break, I continued in my search for hills for the remaining 19.5 km. I went all the way to Bonner (see map below) just to check how Jiri, a colleague from work, was doing with the house he is building. The house is at the top of a hill and that was perfect for my “hit the hills” goal (see the peak at 17.5 km in the elevation profile). By the way, his bamboo flooring looks amazing! 🙂

The map and the elevation showing some nasty hills.

I won’t lie, including hills in my long run didn’t look like a good idea in the last 10 km. My legs were hurting, the pace dropping, and the mind reminding me that this would be more or less my weekend routine for the next 12 months! Too late to turn back, I’m already in my fifth post and already got one donation! I focused on the whys I posted here, and kept going.

Run or pancakes? Pancakes then run!