This post could as well have been called “Do as I say, not as I do”.

Sometimes when I’m coaching the Bilbys’ Friday night swim squad, I ask the athletes to swim a distance, say 150 m, in the pattern easy/medium/hard, and time them. At the end of the distance, the athletes look at the board and can’t believe that their easy lap was as fast or even faster than their hard lap. This happens all the time! You start fresh, you don’t feel the effort. You have to deliberately slow yourself down in the beginning.

But one thing is to fail to pace yourself, another is to knowingly push yourself in the beginning of your activity. Even worse, plan a 5km race in the middle of your long run! And I, ashamedly, have to admit, that’s what I did yesterday. Well, in my defense, it wasn’t all planned…

Yesterday was the last Saturday before my trip and the last chance to fit a long run before the first marathon. After my long with hills last week, I wanted something less demanding in terms of effort, although a couple of km longer. I could have gone for a double loop close to my place but, instead, decided that going south towards Lake Ginninderra would make a more interesting course. But Saturday is also Parkrun day. Parkrun is a free, weekly, 5km timed run. It is open to everyone and happens all around the world. Here in Canberra we have three options: Gungahlin, Lake Ginninderra, and Tuggeranong. I thought: “Why not combine my long run with the Lake Ginninderra Parkrun?” It would be a great opportunity to catch up with friends that are not up to the long distances. So I told some friends that if they were interested in a social timed 5 km run, I’d be at the start line at 8:00 am. No one confirmed but I had a couple of “maybes”. So, that was the plan: 12 km to Lake Ginninderra, 5 km easy Parkrun, 12 km back, and an extra km close to home to make the total 30 km distance. As you can see, I didn’t plan to mess up with my long run.

I woke up early but somehow managed to leave home just a bit later than I expected. I was already outside when I felt my wrist a bit light… “Wait! Where is my Garmin?” Back inside to get the watch… OK. Ready to go again. It is just a matter of time until the GPS finds the signal and…  “Wait! I can’t feel my hands! Where are my gloves?” Back inside to get the gloves… “Where are they? I was sure they were here!” OK. Third time ready. You are not forgetting anything, are you? Oh, yes. It is a 30 km run and you need… food! Forgot my muesli bar on the kitchen bench (wasn’t in the mood for gels). I somehow lost 10 minutes in these mishaps but I finally left home under this beautiful sunrise (at 0oC).

With the cold breeze, it took me 3 km to start feeling my face again. Come on sun, get up!

With the delay I was left with only 50 minutes to get to the start line. I wouldn’t be able to cover 12 km at the planned 5 min/km pace in time, so I took the shortest possible path to Lake Ginninderra. That saved me almost 2 km. To be on the safe side, I also decided to go harder in the first half of my long run, but still not that hard. Got to Lake Ginninderra with 7 minutes to spare but none of the “maybes” were there. The atmosphere, as always, was great and I was already praising myself for the wise decision of breaking the long run and being able to share the path with other runners. However, besides babies in prams, dogs on leashes, and kids running with their parents, there were also those looking on improving their PB. And that is dangerous because you can get carried away… and I did.

As soon as the race started I found myself following some fast people. My Garmin beeped and warned me: “3:46 in your last km”. I could have had two reactions: “Wow, too fast for what I have planned” or “Wow, can I run in under 20 min?”. That is one of the risks of getting addicted to our gadgets and the stats they provide (you may reconsider taking your GPS for every run or ride after reading this great post from the “Fit is a Feminist Issue” blog).

My reaction? Well, I slowed down, but just a bit. It was clear that I wouldn’t be able to sustain a pace under 4min/km, but that 10 year old kid in front of me kept me going at a decent speed. In the end I finished in 21:36, chatted with a friend, ate my muesli bar and headed back home. 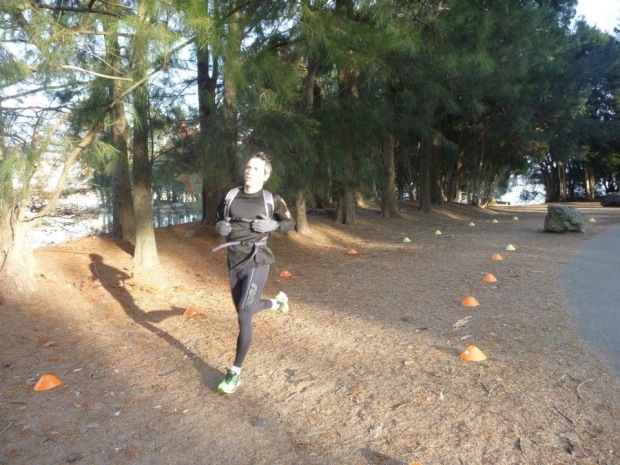 That’s when all my mistakes came back to haunt me. The legs felt really heavy from the start and I knew I had to endure another 14 km along the (not always) gentle uphill towards Gungahlin. I hate when I’m much slower than I can be and felt like cutting it short. “Maybe 26 km is OK today”, I thought. I’m glad I didn’t. A lot of the benefits of the long runs happen at the mental level. You learn to be resilient, so I sucked it up and took a left turn towards the longer and hillier course option. From the 24 km I was again enjoying the run. I had learned to accept my slower pace, was appreciating the views, and this song from The Bamboos kicked in my playlist.

Pace and elevation profile from my run divided into the 3 stages: out (yellow), Parkrun (blue), and back (pink).

Running on very tired legs was a valuable lesson, especially considering that this is a very likely scenario for the many kilometers that are ahead of me in the next year.